​I was a business writer for most of my professional life, and have been a poet for almost all of my personal life. At the age of 53, I became a born-again Messianic Christian, and began focusing on faith-based writing. My poetry, articles and short stories have appeared in various publications. In 2005, I won first place in the Fire By Nite short story contest. I collaborated on a friend’s memoir, Parting the Black Sea: The Prophetic Fulfillment of a Second Exodus, published by Redemption Press in 2010. I live with my husband and two rescued dogs on Long Island, and serve as a deaconess at Hampton Bays Assembly of God under Pastor Eric J. Rey. 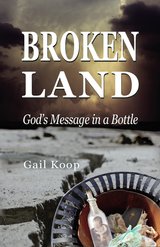 After witnessing my brother’s miraculous emotional healing just before his death, I set out to find the God who enabled that miracle. After reading The Purpose Driven Life, I sought out a Bible-believing church, where I serve as a deaconess today. Having had vivid, memorable dreams my whole life, they began to change after my conversion. I recorded all of my dreams, one of which birthed Broken Land, and many others which became part of it.

Through writing this book I realized the grace, mercy and forgiveness of God in a new way. And how His hand has been on my life forever, even when I had no idea who He was. I recount this as part of my story, to encourage others that just because it doesn’t feel like God is there, doesn’t mean He’s not.

The purpose of this book is to speak God’s Truth into a culture that has thrown it away. And with that Truth, convict hearts and minds to return to God so that He can heal our Broken Land. The prayer of the book is that of 2 Chronicles 7:14: “if my people, who are called by my name, will humble themselves and pray and seek my face and turn from their wicked ways, then I will hear from heaven, and I will forgive their sin and will heal their land.”