How God Confirmed His Message 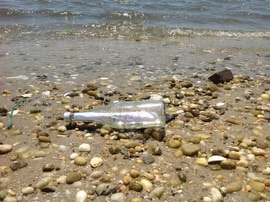 ﻿Throughout the four years I struggled with this book, its title had been, "Message in a Bottle." But after God led me to my publisher, we realized that title had been copyrighted because of the book and movie.

As we were trying to come up with another title, but one that still had "message in a bottle" in it, a friend suggested revisiting the dream that had birthed the book. She said, "I'm sure God already gave you the title."

Sure enough, as I read through Chapter Five, and how in the dream Brooklyn was the place the baby had been taken to, and that Brooklyn means "broken land," I knew that was the title. And that this is not just "a" message in a bottle. It is God's.

On  the day I submitted my final edits,  the last of which was adding a phrase to the very last sentence that speaks of the importance of having childlike faith, I took my two dogs for a walk on the beach. As I often do, I talked out loud to the Lord. "OK, Lord, I finished what you asked me to do." I had a sense of relief, but at the same time, a sense of trepidation. The message of this book was not something I'd chosen; in fact, it was one I ran from. Until I had no peace.

So on that June morning as my dogs ran in front of me, I caught  the glimmer of an object in the distance on the shore. The closer I got to it, the faster my heart beat. I felt like I was in one of my own dreams. It was the bottle you see in the picture on this page. And inside, there was a rolled up piece of paper with writing on it. A message in a bottle. And not only was it a message in a bottle, it was sent by a little girl in childlike faith that someone would find it. What are the odds that it would be me on that day?

I keep that bottle on my desk, and bring it with me wherever I go to speak about this book. Because it is absolute, supernatural confirmation that: